Monitoring new pests and diseases on the horizon

What is plant biosecurity?

Protecting the health of plants is a difficult business; yet, by implementing good plant biosecurity it is possible to mitigate against these risks. Although we now all refer to plant biosecurity what does it mean? We can start by looking at the definition of plant biosecurity; ‘a series of precautions that aims is to prevent the introduction and spread of harmful organisms’. This definition not only refers to introduction and spread but also ‘harmful organisms’. Yet, with so many organisms in association with plants, which of those should be considered as harmful (also referred to as a pest – including both pests and pathogens)?

The World Trade Organisations (WTO) agreement on Sanitary and Phytosanitary Measures (SPS) provides the framework for international plant health arrangements. Phytosanitary measures must be based on scientific principles using pest risk analysis (PRA) and based on International Standards on Phytosanitary Measures (ISPM). PRA is defined as ‘the process of evaluating biological or other scientific and economic evidence to determine whether an organism is a pest, whether it should be regulated, and the strength of any phytosanitary measures to be taken against it ‘ (ISPM 5; Glossary).

How its applied in the UK

In the UK, the threat from plant pests and diseases is assessed by PRA and managed through the UK Risk Register. Each year about a hundred new pests and pathogens are added and currently there are over 1100 entries. Each organism is allocated a score, with and without mitigation, on a scale from 1-125 dependent on a wide-ranging of factors that includes: likelihood of entry or establishment, rate of spread, impact (economic, environmental, social) and value of hosts or industries risk The greater the risk that higher the score.

Mitigation encompasses a range of different approaches that include the key approaches of regulation, surveillance, industry scheme, contingency plan, raising awareness and research. Not surprisingly, one of the key areas of uncertainty is the distribution of an organism and hence the importance of surveillance.

How the Observatree programme helps

Observatree volunteers are tasked with carrying out surveillance for named priority pests and pathogens including organisms such as Oak processionary moth, Asian longhorn beetle, and Ash dieback. At the start of the project in 2003, working with plant health policy advisers and pest risk analysts a list of 20 high-profile pests and diseases were selected. Great care was taken to ensure that the targets selected were suitable for citizen science surveillance. This included criteria that the symptoms must be seen above ground level, had a number of features that could be easily recognised and discriminate them from other common pests and pathogens or rare or red listed species and occurred on common and important tree species. The list also includes a mix of organisms not known to occur in the UK such as Emerald ash borer; but several that had arrived recently such as Ash dieback. The inclusion of the later ensures volunteers can utilise their skills such as tree identification, geographical location recording, reporting via Tree Alert. It would be a great shame, if a volunteer was to find the first UK record of a pest such as Emerald ash borer, but then has not exercised their skills to report their findings for official follow-up.

Every year the Observatree priority list is reviewed due to changes in the UK Risk Register. Although the temptation would be to continuously add several new organisms a year, we are mindful of the volunteers and projects’ capacity to cope with too many organisms. The priority list has expanded in the past two years to include emerging threats such as Cedar blight (Sirococcus tsugae) and Elm zigzag sawfly (Aproceros leucopoda).

Beech Leaf Disease – One to watch

In 2019 a total of over 30 pests and pathogens were added to the UK risk register, of these 12 occurred on trees, but only one, the putative cause of Beach leaf disease (BLD), met the criteria of having a UK risk register mitigated value of greater than 30 (and therefore analogous to the existing priority pests and pathogens) and had symptoms suitable for citizen science surveillance. This new syndrome had been considered previously, but it was only in the past year that the cause, and nematode called Litylenchus crenatae had been identified. According to the European Plant Protection Organisation ‘ A new disease of beech trees (Fagus spp.) called ‘Beech leaf disease’ (BLD) has increasingly been observed in forest areas in Eastern USA and Canada and is raising serious concerns among foresters and local communities in affected areas. The disease was first reported on Fagus grandifolia in Ohio (Lake county) in 2012, and it rapidly spread to other counties in Ohio, as well as to Pennsylvania, New York, Ontario (Canada), Connecticut, Massachusetts, and Rhode Island’.

Early symptoms of BLD include dark-green striped bands between lateral veins of leaves and reduced leaf size. Banded areas usually become leathery-like, and leaf curling is also observed. As symptoms progress, aborted buds, reduced leaf production, and premature leaf drop lead to an overall reduction in canopy cover, ultimately resulting in death of sapling-sized trees within 2-5 years and of large trees within 6 years. In areas where the disease is established, the proportion of symptomatic trees can reach more than 90%. However, it is noted that some variability in susceptibility has been observed among beech trees. Our Observatree volunteers have received training on-line in this new disease and encouraged to report suspicious symptoms through Tree Alert. In 2021, we will be developing further resources to support our 22 and potentially new Priority Pests and Diseases. 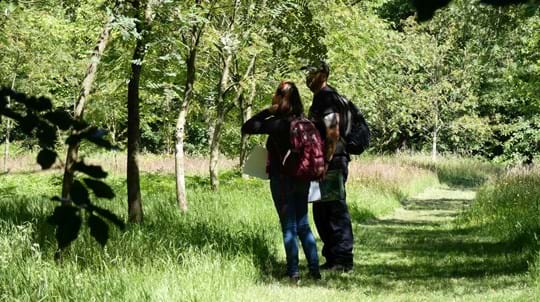 The importance of biosecurity