Thanks for the opportunity to share with the readership at Obvservatree UK some of our experiences surveying and detecting emerald ash borer (EAB) in Canada. If and when EAB arrives in the UK, we hope that you detect it as soon as possible, so that management and containment costs are minimized. Hopefully, some of our experiences will be interesting and helpful in this regard.

Educating and engaging the public and key partners to recognize and report signs and symptoms of infestation by EAB (as well as other invasive pests) is critical and not an easy task when there are so many other things on people’s minds. However, most people are passionate about trees in their yards and cities and want to protect and preserve them as much as possible, so if we can tap into a little of that, it can be a great resource for invasive pest surveillance.

In spite of our best efforts to detect EAB early, most newly discovered infestations have resulted from provincial and/or municipal partners and arborists reporting dead or dying ash trees to the Canadian Food Inspection Agency (CFIA). We examined CFIA records from 2002, when EAB was first detected in Canada in Windsor, Ontario, to the present. We noted how EAB was first detected in new locations as it spread both naturally and via human-assisted movement all the way to Winnipeg, Manitoba (2017) and Halifax, Nova Scotia (2018), which are 1400 km to the west and 1600 km to the east of Windsor, respectively.

Of 70 new county records that resulted in new or expanded regulated areas for EAB in Canada, 38 (over 50%) were reported by partners and arborists. Detections of EAB adults on green sticky prism traps deployed specifically for EAB survey by CFIA and its partners accounted for 25 (36%) of the new records. Although reports from the general public accounted for only 4 of 70 (6%) new EAB detections, these reports occurred in 2018 and 2019, indicating citizen awareness is on the rise. Furthermore, citizen reports of EAB within already infested areas have increased significantly over time, likely due to increased evidence of ash decline in residential areas in addition to enhanced communication efforts in education and outreach. Increased public awareness and reporting of EAB is critical because it helps municipalities delineate infestations and target their mitigation methods (e.g., stem-injected insecticides, removal of heavily infested trees before adult emergence) where they are most likely to succeed.

These figures indicate that knowledge transfer and dedicated collaborative survey activities have helped track the spread of EAB in Canada and have assisted CFIA in expanding its quarantine zone to reduce the risk of human-assisted spread. However, they also suggest there is room to improve the contribution from citizens in spread of EAB in Canada, and initiatives like Observatree could be very useful in that regard.

One of the ways that CFIA has engaged and informed the general public and partners, is by distributing nifty little wallet size cards for each of their regulated invasive species of interest, including EAB, at meetings, presentations, and when field staff are approached by curious passersby.

A really nice feature is that the cards also have life-size adult emergence holes in them (e.g., a D-shaped hole in the case of EAB) that a person can use to correctly identify an EAB-exit hole on the bole of an ash tree.

In addition to public engagement, CFIA and its partners currently deploy about 600 “EAB-green” sticky prism traps per year in annual surveys to monitor the spread of EAB. The traps are baited with the green leaf volatile (Z-3-hexenol) and a female produced sex pheromone (Z-­lactone) (developed by Drs. Peter Silk, Krista Ryall and colleagues at Canadian Forest Service (CFS)) and placed in the crown of ash trees, preferably in a spot with lots of sun exposure, as this increases chances of detecting EAB.

One of the difficulties in early detection of EAB infestations is that external signs and symptoms, such as crown dieback, D-shaped exit holes on the main stem, and bark flaking from woodpecker feeding, are not evident until 2-3 years after a tree has been infested. However, Krista Ryall and others from CFS have developed a method that can detect the presence of EAB in asymptomatic trees with 74% accuracy: two mid-crown ash branches are cut and 75 cm from the base of each branch is carefully peeled in thin (2-3 mm thick) strips with a drawknife to expose larval galleries. The method is labour-intensive but many cities in Canada and the United States have used this method. It was first used in Sault Ste. Marie and Oakville, Ontario, where it helped delineate EAB infestations and prioritize insecticide applications and tree removal. Branch sampling provided the first detection of EAB in Quebec City in 2017 and helped delimit the infested area in Bedford, Nova Scotia in 2018. The City of Fredericton, New Brunswick, proactively used the branch peeling method to sample 100-150 trees per year in 2018 and 2019 in efforts to detect EAB early.

his was made possible by a collaboration between City staff foresters and students at the Maritime College of Forest Technology (MCFT) under the guidance and training of CFS technician Kate Van Rooyen and MCFT Instructor Sarah Weatherby. In a similar example, 4th year forestry students at the University of New Brunswick provided the village of Oromocto with a tree species inventory and map of their street trees – knowing where your ash trees are is a huge advantage when surveying for EAB. These collaborative efforts not only provide a valuable service to local municipalities faced with managing EAB but also benefit the students with hands-on practical training in forest pest management.

Our thanks to Jeff Fidgen (CFS-Atlantic Forestry Centre) for reviewing and improving the contents of this blog! 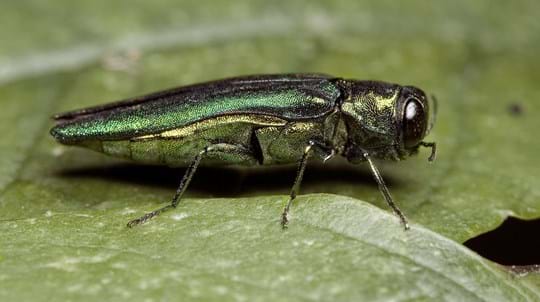